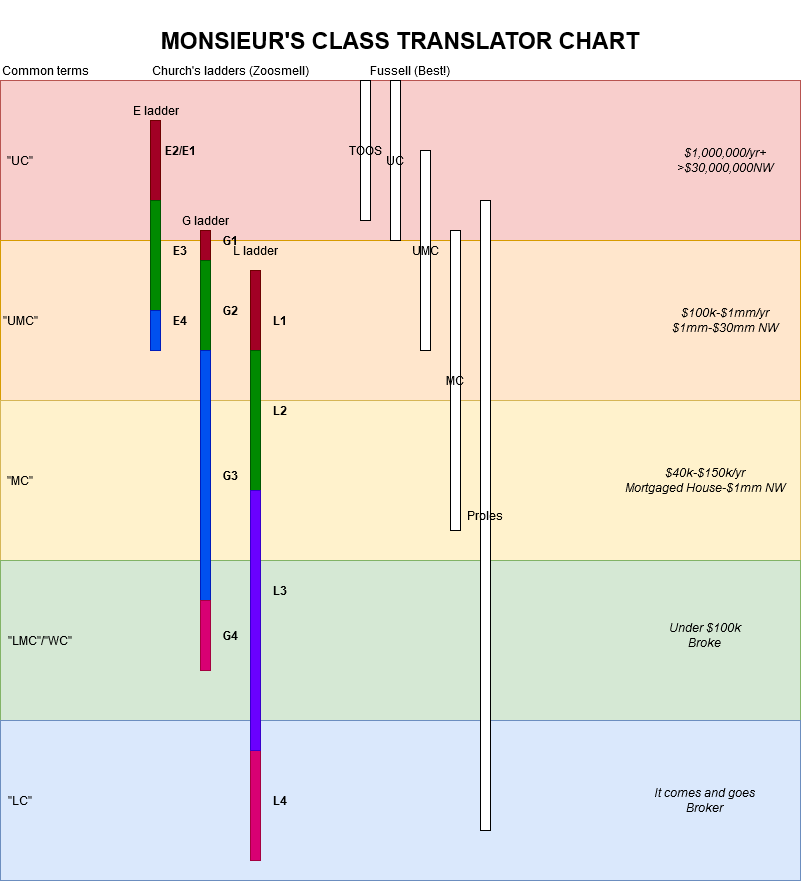 Next time you’re talking to someone and the labels get thick and confusing, use this.

Class is a sticky socio-economic concept.

When someone says “UC” or “UMC” or what have you, they could mean any of the things to the right.

Church’s conception of class is basically three career tracks or life paths. A young E begins their life in E4 and tries to scrabble upwards. They start with a ticket punched to join the ranks of America’s professionals, but often have their eyes on higher things. A G dues pays their way up until they arrive at a comfortable G2 position. These are the people who go to the Big City to “make it”. Labor people develop skills and certifications to advance, while paying their dues in time. These represent three ways of making your way through the world. You can vaguely call them “connections”, “culture”, and “skills”. Church is bigoted against Es, who he considers vaguely sinister at best and downright Satanic Illuminati evil at worst.

The money conception of class is rarely expounded formerly by any academic or bloggers, but it’s probably the most naturally American. Class is your money, and class can be bought. The economic brackets I have highlighted can be thought of the status of established households. You will note the considerable overlap. This is intentional. Each economic class imparts different attitudes about money. For the uppers, they simply do not understand money, just as a fish does not know what water is. How could they? For the upper middles, money is a tool of influence and power, used to extend one’s reach. Debt and hard cash are interchangeable as “liquidity”. Two attitudes predominate: “Ambitious” and “Contemptuous”. The ambitious mindset is possessed by those well-aware of their own lowliness, who feel the knife cutting lightly into their dangling gonads. The contemptuous mindset is possessed by bohemians, who turn their back on a life of striving to go live in a dumpster. The middle segment sees money as a way of obtaining fine goods, the better things in life, and to keep up with the Joneses. Their watchword is “comfortable”, they are born into “comfort”, then spend their adulthoods trying (and sometimes succeeding!) in regaining that “comfort”, banishing money anxiety from their minds. The working and lowers experience money as a fleeting thing, to be spent as soon as it is seen, before it darts away. In fat times, they purchase bling like jewelry and TVs and boats. In lean times, they clip coupons and try not to starve.

The common terms are basically a hodge-podge medley of all these concepts. And this occurs partly because it is true. People of the “UMC” world might interact with Es who were born into professional jobs, Gs who finally clawed their way into being G2, and labor elite business owners. Trump might act like a member of Fussell’s Prole tribe, but he still lives among people of the “UC”. It’s very easy to imagine a teacher knowing a cop, even though a cop is the better sort of prole/L, while a teacher is a “Middle” or a G.

Are you still confused?

At least I got to draw.

"I use the dark mode palette and so must you."Follow

Fascinating. tl;dr it's a lot harder to manufacture the same stuff now than in the 70s https://t.co/tqAEFDvPwM

Bioleninism shower thought. I once said to Spandrell the REDGOV and CCP can't do good propaganda for similar reasons: they're fundamentally military technocracies and propaganda belongs to the BLUGOV. Well, look at it now. Lujan, glowie trailer, etc...

Do you lemmings seriously need to troost expert "disclosures" before you believe anything? Frustrating.

In January in 2020, I was saying "We'll just lockdown for two weeks, what could possibly go wrong? The US military is a well-oiled machine. We're already spinning up vent production."